I've been traveling for the past 2 weeks so no real updates for the orks.

I will be teaching 2 classes at Adepticon 2012

Photographing Miniatures
One on Saturday
One on Sunday

I will be showing how to do a basic setup for under $50 in materials to get photos like this: Tonight I had a near miss, if it had hit me I would be in the ER right now. We get so use to what we do we can forget simple safety. Be it the chemicals in the product we use or remembering where the x-acto knife is before standing up! 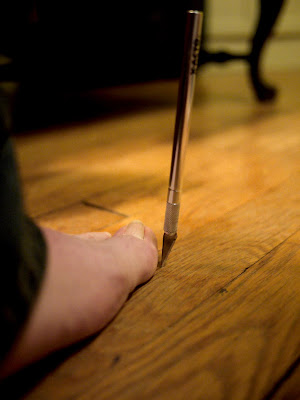 I missed it by THAT much!
Stay Safe,
wynnstudio
Posted by Wynn Studio Models at 11:44 PM 1 comment:

It's amazing how life can get in the way hobby work. I have neglected this blog a little to long. I will be covering my new army build. It is for Adepticon 2012, it's give me 6 months to finish. Even I can do that.........
So here is a little teaser.

My task for The Great Storm Wardens Collaborative Army Build and Charity Drawing" is a 10 man Squad of Scouts and a Land speeder Storm. The basic squad is together and now for some nice details. The background for the Storm Wardens gives them a bit of a William Wallace feel, they even have woad facial markings. I used some of the less nordic looking space wolf scout heads to go with the "Wallace" feel. 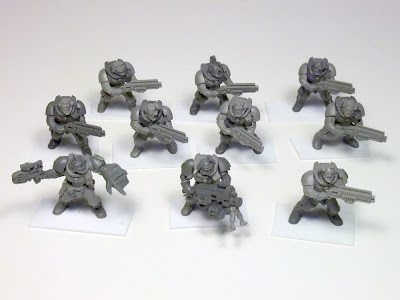 I went a little overboard with the Scout Sergeant and gave him a powerfist and plasma pistol. 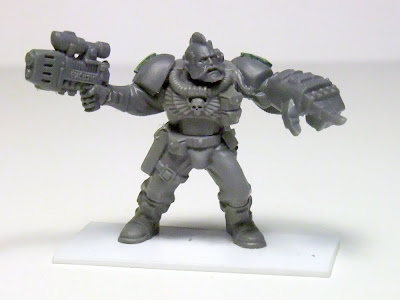 All the scouts will be getting greenstuff should pad markings, The Storm Warden Shield and squad number. 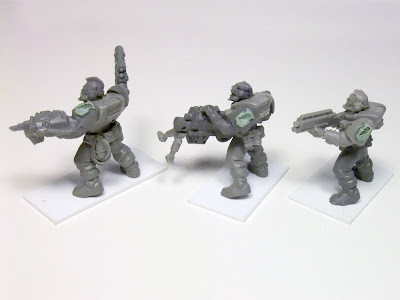 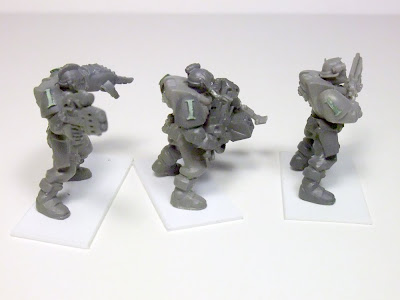 The greenstuff markings are made from laser etched mold that I make. 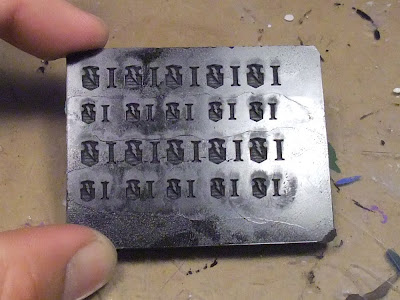 I then use a mold release and press the greenstuff in and let cure overnight. Once peeled off you trim the individual icons/numbers off and glue to the shoulder pads. 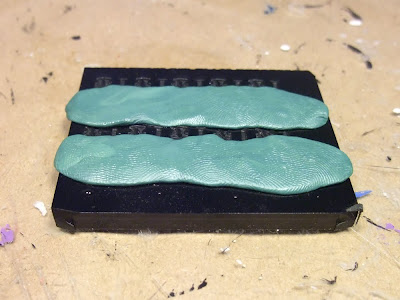 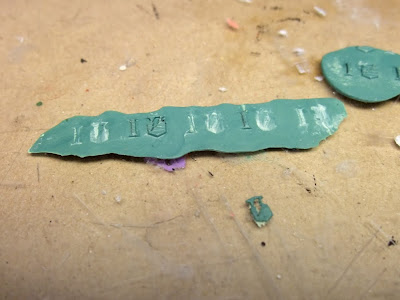 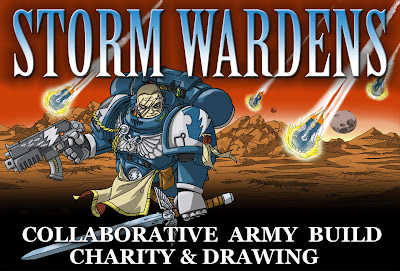 Well here it is, "The Great Storm Wardens Collaborative Army Build and Charity Drawing"
We have gotten so much out of this hobby and our blogs that we decided to give back a bit and work together on something awesome, and raise money for charity.
The end result will be an incredible painted army going to one of you, the WINNER of this drawing.
The Army.
The Storm Wardens are a new Space Marine chapter from the yet to be released Death Watch RPG. Together with Games Workshop, Fantasy Flight Games (Horus Heresy, Wings of War) has been developing the game which will be released this summer.
We approached the folks designing the Death Watch game while planning this project, and told them we were thinking of building a Storm Wardens army, and they loved the idea. They have been working with us in getting the look of the army just right and giving us some great unreleased fluff and imagery. 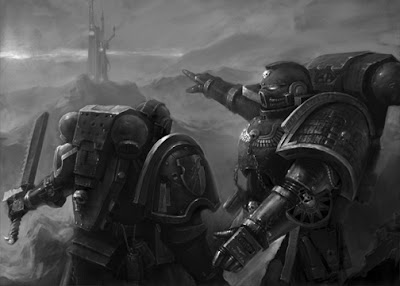 We are going to build a complete Storm Wardens Space Marine army with a decked out HQ, Marines, Veterans, Scouts, Terminators, and a bunch of vehicles, a massive army that any commander would be proud to field.
You will be able to see the army units come together and follow the army build progress through links to all the builders blogs on our "Storm Wardens" mini blog roll.
Who will be working on the army?
Dave Taylor
Mike & John (Santa Cruz Warhammer)
Jawaballs
Ron Saikowski (From the Warp)
Mister Justin (Secret Weapon Miniatures)
Mik (Miks Minis, Barter Bucket)
and me, Thomas Wynn, with generous support from Games Workshop in White Marsh MD.
Along with the blogger build team, we are going after some hobby retailers to give up some loot to add to the army prize. Secret Weapon Miniatures is donating all the custom bases, and Chessex has already sent us the custom dice.
What can you do?
Well, you can donate money to the cause. You can donate to the fund we are raising at the top right of this page or any of the other participating bloggers, using PayPal or a credit card. Each donated dollar will also qualify you for a chance in the army grand prize drawing, the more you donate, the better your chance of winning, and more money for charity.
We will randomly draw the winner in mid July.
What if I don't have any money, but I still want to help?
Dig around under the couch cushions or under the seat of your car, put on some dark sunglasses and sell pencils out of a cup on the street corner, or even sell some extra Warhammer minis on Ebay, then use that cash for a donation.
You can also help by linking to this project in your blog, telling your friends and other gamers, mention it at your gaming club or even posting about it in your favorite forums, this will help us get the most exposure we can, so we can raise more money for charity.
If you have a small business (or know someone who does) that might have a product to donate that would be great to add to this army, contact us about a feature during the build.
Why should I help out?
If you have ever read something on our blogs that you thought was cool, gave you a good idea, showed you how to do something better, downloaded a free drop pod template, used the Barter Bucket, or perhaps you even got something from us for free and you are feeling a bit guilty about it.... well, now is your chance to give something back, pay it forward, return a good turn.... well you know.
Oh yeah, and you could win an entire finished army, by giving $1 to a good charity.
Where does the money go?
The money will be donated to Doctors Without Borders, and actually help people. We chose Doctors without Borders because their cause is a global pursuit to help people in need, where ever help is needed most, and they have a good track record with getting the $ where it does the most good.
So there you have it. I hope you are all as exited about this as we are, its been tough keeping it a secret.
So.......who wants a new army?
Posted by Wynn Studio Models at 12:34 AM 8 comments: